According to the latest report published by the Institute for Gender Equality, the wage gap in Belgium remains significant. However, the trend seems to be pointing to a decrease of the gap.

The Institute for Gender Equality and the FPS Employment, Labour and Social Dialogue have published their latest report on the wage gap in Belgium.

The figures provided by the Directorate of General Statistics of the Federal Public Service Economy, SMEs, Self-employed and Energy and the Federal Planning Bureau shed some light on the various factors that play a role in the wage gap. 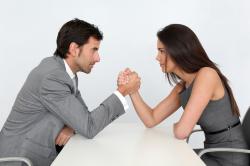 In 2011, the study highlighted a significant increase of the nationality factor's growing importance in the wage gap. In 2012, this factor remained significant. As a result, 9.5 % of the explained portion of the gender wage gap can be attributed to being a foreigner or a national.

Specifically, taking the Belgian economy as a whole, women earn 9% less than men per hour worked.

It is therefore a decrease in the wage gap based on hourly wages as compared to last year.

It is important to provide an overview of the gender inequality as a whole, so the report highlights a second general indicator. According to the latter indicator, the wage gap calculated on an annual basis amounts to 22% in our country. The difference between these two figures can be explained by the effect of part-time work.